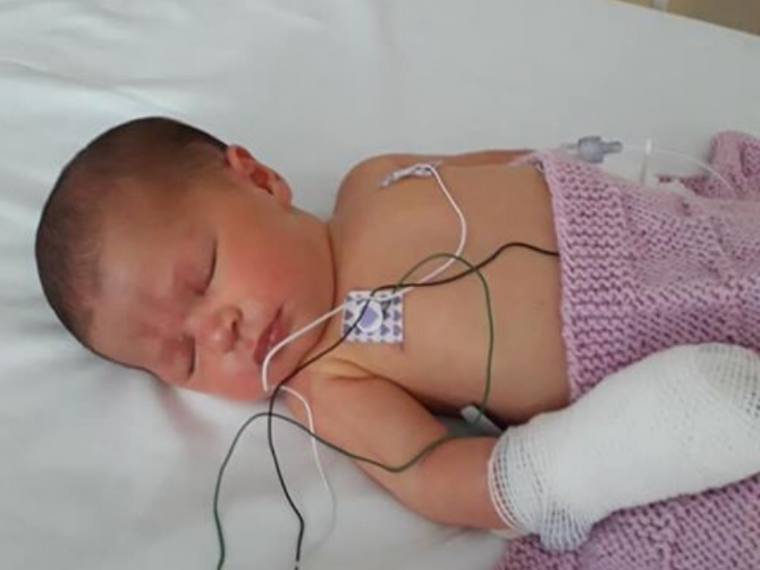 Samantha May Graham, 31, said staff at York Hospital saved her daughter’s life when she twice developed meningitis caused by a group B Strep (GBS) infection – which she says could have been avoided had she taken a simple test while pregnant.

Lola was rushed to hospital when she was nearly two-weeks-old after Samantha called NHS 111 when her daughter began to act unusually. She was making grunting sounds, her skin became mottled and she was repeatedly lifting her legs up and down.

An ambulance was sent to their home within five minutes and a seriously ill Lola was diagnosed with meningitis.

While being cared for at York Hospital she suffered fits due to the pressure on her brain and was sedated and put on an antibiotic drip.

“Everything was a blur – it was a worrying time,” she said, “Every day was heartbreaking, seeing your little girl fighting for her life.”

After being allowed to return home with her mum and dad Stephen, Lola was rushed back into hospital with a reinfection.

Seven-week-old Lola has now spent five weeks of her life in hospital and a consultant has told the family that a scan of Lola’s brain suggests the possibility of a disability in the future but the extent this will affect her will not be known until she gets older.

Samantha has said that had she known what she does now she would have chosen to be tested for group B Strep during pregnancy and she wants mothers to know they are able to do this. “I would hate anyone to go through what me and Steve have been through,” she said, “It’s every parent’s worst nightmare.”