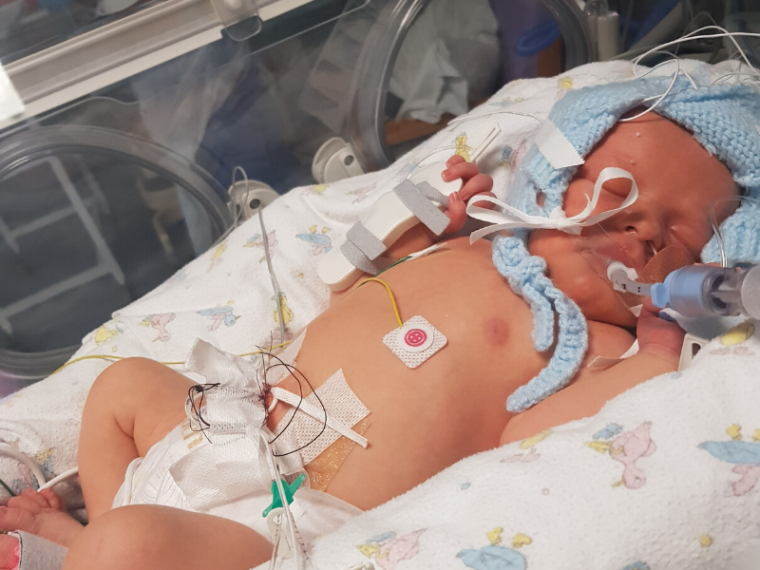 “1 in 4 women carry it and don’t know they have it, I never got swabbed or checked for it. If I can help others and raise awareness of GBS by my story, please find and sign the petition for pregnant women being tested in the UK.

On the 12th April our beautiful boy was born. Little did we know we weren’t taking him home. Within 2 hours of his life he began to drop his temperature, started to grunt, refusing to feed and breathing very fast. The nurses took him straight to Neonatal unit where he was placed in an incubator where they began to connect wires and start a drip as his sugars were low, and started antibiotics.

I tried to keep a brave face until I got back to the ward where I broke down crying as I left my baby and he didn’t return back to the ward with me. Later on that morning the midwife came to update me, he had to have an oxygen tube as he couldn’t breathe by himself. During the day his infection levels came back, they were rising.

Saturday they came to a decision.  He had to be transferred to Oldham hospital as they are a level 3 hospital. We as parents were panicking even more as he wasn’t getting any better.

When he arrived at Oldham hospital it was confirmed he had Strep B sepsis and later that night his infection levels went to 179 and carried on rising.

During the next couple of days he had a lumbar puncture, brain scans and regular checks. His infection levels gradually started going down, his lumbar puncture came back clear as did his brain scan. A few days later he came off his oxygen tube and I finally was able to give him a cuddle. He also began to have some milk through a tube.

By Wednesday he returned to Wigan as he was getting better, he was able to go in his cot and be dressed. By Easter Sunday we got told his infection levels are under 4 and he was able to come home, and has finally started to drink out of a bottle.

Tuesday 23rd April he was able to come home after 11 days in the Neonatal unit and we are so proud of how strong he has been in fighting the infection, as the outcome could been worse.”