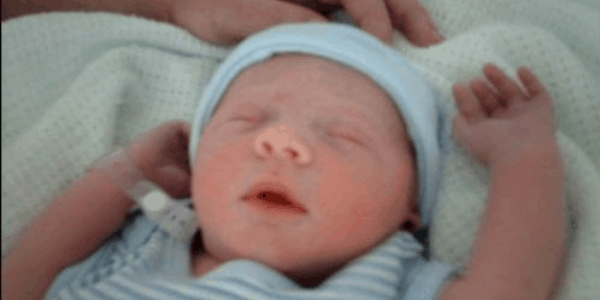 Nadia writes “I’d had a textbook pregnancy until around 32 weeks when I was told my sons growth had slowed down a lot at a growth scan requested by my midwife. In the following 3 weeks I was scanned two more times and at 35 weeks into my pregnancy we were told there was still no change in his growth and that they needed him out. So that day, I went home and collected my hospital bag and head back to the hospital to be induced.

It was fairly straightforward, I was given the gel to start things off and by 9am the next morning I was in full labour.

Brandon Jack Kyles was born at 17.24 weighing 5lb12.5oz. We were told to expect him to be between 3 and 4 pounds so even though he still looked tiny, his size still surprised us! He cried, lovely loud cries. He took his bottle and we had lots of cuddles.

Then it all started to go wrong. I noticed his breathing was extremely laboured, he was trying so hard to breathe, his stomach was pulling right in and pushing right out with every breath he took. He was also making a loud noise (called grunting) I pointed this out to the midwife who told me he was fine, and that it’s normal in premature babies. I wasn’t happy with her answer so I asked her to get the doctor.

The doctor came to see him and backed up what the midwife had said about him being premature. I asked if he needed a bit of extra help to breathe and she said that his nostrils weren’t flared when he took a breath so she wasn’t concerned but agreed to check back in an hour.

Around 20 minutes later I asked for her to come back as he was getting worse, he was breathing so quickly, almost like he couldn’t get a breath fast enough and the grunting was louder. Finally, she agreed that he needed help and he was taken to the neonatal intensive care unit (NICU)

I was allowed to see him at about 10.30pm that night. He was on a cpap machine. They said he was doing well and was stable. After hearing he was ok and sitting with him for over an hour we decided it was best to get some sleep so we could get back early to see him in the morning.

I will always remember him holding on to my finger and having to pull my hand away gently as he was holding on so tightly.

At around 3am I was woken by a midwife saying I was needed in the NICU as Brandon had gotten slightly worse. I went along but wasn’t allowed in straight away, they were doing a heart scan on him to see if he had any heart conditions. I was told that he had also had X-rays of his lungs done just before I got there.

I was put in a room and left on my own not knowing what was going on with my baby. I sat there for half an hour just crying.

Eventually I was allowed to see him. He was now on a ventilator as he was struggling so much. They said his heart scan was clear and that although his lungs were slightly under developed that they were fine too. They simply couldn’t give me answers as to why he was so ill.

He stabilized for a while, things were looking good. By this time his dad was with me and we were allowed to stay in the family room next to the NICU.

After a while he started to go downhill again. The doctor told us that they wanted to transfer him to Yorkhill Hospital in Glasgow to try him on ECMO, a machine used to support the heart and lungs. This confused me as they told us they were ok but obviously we agreed as we thought they knew best. We just had to wait for an ambulance to come to transport his incubator, the nearest one was 2 hours away.

In that time, new doctors came in for the morning shift. And it wasn’t until then that a doctor called Dr Drimmie, mentioned group B Strep to us. This was the first time I had ever heard of this. She explained to us that group B Strep is an extremely dangerous infection in newborn babies and this is what she thought was wrong with Brandon. She told us that she had seen it a few times and the majority of those babies who were as ill as Brandon was at that time, passed away. This was a huge shock. And just as she was telling us about this another doctor came running through frantically saying he thought we were about to lose him.

We ran through and one doctor was holding and oxygen mask over his mouth and the other was pumping his little chest. Finally they stabilised him and we couldn’t have been any more relieved. I sat by his bed just looking at all of the machines, watching the numbers go up and down, listening to all the beeping just wondering what it meant.

The ambulance still hadn’t arrived to take him to Glasgow, Dr Drimmie told us she didn’t think he was strong enough to survive the journey and that he had roughly a 1% chance of making it there alive. We weren’t allowed in the ambulance with him as there was no room, we would have to follow in a car. We wouldn’t know until we got there if he had survived. She told us his best chance was to stay where he was and they would do everything they possibly could.

It wasn’t long after that, that we were told that he wasn’t going to make it. For the second time we watched them pump his little chest just praying to anyone who was listening to let our little boy pull through. By this time, my mum and dad were with us.

The doctors handed us our little boy who we had just welcomed into the world 17 hours previously. We held him in our arms as a doctor held a stethoscope on his chest. And just with a little nod from her our world came crashing down. Our son was gone. He wasn’t coming back. My heart broke into a million pieces.

The next few hours were a blur, I remember bathing him, dressing him and just sitting crying like I’ve never cried in my life while our families came in to visit him for what would be the first and last time.

Leaving the hospital that night was horrible. I sobbed as I closed the door and left Brandon in a room alone.

I shut myself off from a lot of people in the days and weeks following. I didn’t go out much. Only to his funeral and a follow up appointment with his doctors.

If my story can make even 1 person get tested during pregnancy then that means the world. I completely agree that this should be tested for routinely but there has been next to no change in the 12 years I’ve known about it. Group B Strep Support is a fantastic charity who has been working tirelessly to make more people aware of group B Strep.”