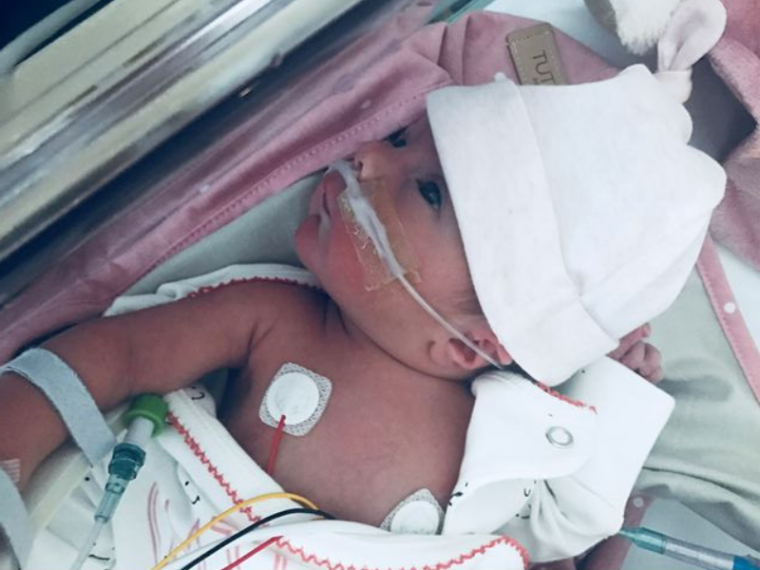 After a tough birth for my baby and I, I gave birth to my beautiful baby girl, weighing a small 5lb 10oz just over a week early. She was perfect and after being checked over on the Monday evening when she was born she was given to me and I was told everything was fine and she was perfectly healthy.

After going down to a private room I slept on and off, adrenaline still high as I watched Amely sleep, I kept waking and hearing her making grunting noises when breathing, even though she was my fourth baby I didn’t worry too much.

Morning came and along came the midwives to check her over, within a few minutes there was a doctor in the room, not happy with her breathing and temperature was slightly raised and asking how she slept.

Within half an hour she was being taken up to the NICU and having a canular put it and a lumber puncture was about to be performed. I had NO IDEA what was going on.

My husband had gone home and thank goodness I had my friend with me. Suddenly being taken away from my baby whilst a room was being sterilised for her to have the procedure.

After taking some blood from her foot and watching them try to take blood from her other hand with great discomfort and difficulty the lumber puncture results they finally gave me was a diagnosis of group B Strep infection.

The next 24 hours she had a scan which told then she had fluid on her lungs, so she was put on extra ‘air’ to try and clear this. Her infection levels were over 140. For anybody with a slight infection it’s anything just over 10.

My baby was poorly. Really poorly. They did a brain scan to rule out meningitis, intense hearing tests as GBS can affect babies’ hearing. She spent the next few days in the same way until her infection levels gradually started coming down after lots of high doses of antibiotics. She gradually came off the extra breathing help and after a week we came home. The following day the midwife came around to our house for the usual first day check. Within 15 minutes I had 3 paramedics in my lounge, what I hadn’t noticed is her breathing, she was sucking in her chest and taking too many breaths in a minute than she should have been… the infection hadn’t gone. Back to hospital we went by ambulance. We waited to see the doctor, when she came in she wanted to quite quickly do another lumbar puncture. It was midnight, I was without my husband. I cried a lot! Luckily my friend who was also there for me the first time round had just happened to be there with me again. She held my hand whilst I listened to my baby scream out in pain without me being able to hold her hand and instead with about 6 nurses and doctors I had to put my trust in. My heart was breaking. This was my fault. Amelys infection levels were still too high and unfortunately, we came home too early from NICU.

After a few more days of antibiotics and some praying she was finally getting better. FINALLY getting some positive news. When Amely came home we were completely overjoyed to have her with us. Safe, happy and most importantly not poorly anymore. She is now one years old and thriving. I’m so so proud of her, she is my blessing, my little fighter.

But why didn’t I know about this awful infection? How had I had no information on it? Why was I not tested? Could I have prevented this by knowing I had it? YES I probably could have done. Raising awareness for GBS is so important. I knew nothing about it after 4 babies! I was lucky but so many parents aren’t. I feel blessed. I have my little girl. My angel. #GBSS

Thank you for reading my story.