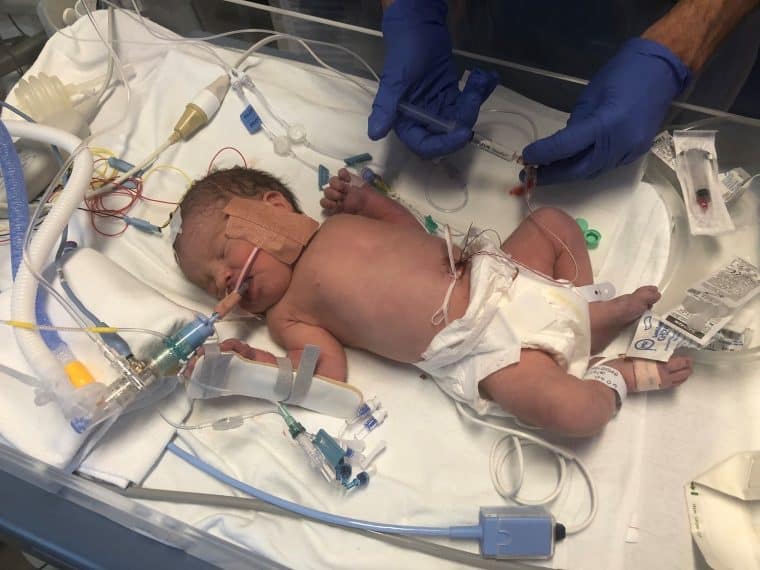 Alfie’s mum Sadie writes, “During my pregnancy with my first baby Alfie I knew something was not quite right. From 28 weeks his movements were very slow and over the coming weeks, got worse and worse. I was feeling very unwell in myself with sickness and pains. I attended Queen Alexandra Hospital maternity unit many times with these concerns and was reassured over and over that my baby was fine, even after concerning scans of reduced blood flow to his brain.

When I got to around 34 weeks, I was adamant. I went to see a consultant who listened to my concerns and decided to induce my labour with Alfie at 36 weeks, so I was booked in on 19th February 2019 and was told to wait for a call. Of course, this call never came. The next day I went to the hospital and again they attempted to send me home to which I refused. Finally, a consultant admitted me, and my induction began that evening.

My contractions started on the Thursday morning 21st Feb. The midwife with me during my labour had started getting concerned with my temperature and Alfie’s heart rate. She asked for help several times but was told all was ok. My labour progressed very slowly, so I was given an epidural and put on a hormone drip to speed this up. After a couple of hours I was examined again to which I was 10cm dilated and told I could push when the registrar returned. This happened to be two hours later by which point there were more concerns over my babies health, a blood sample was taken from his head and with that I was rushed down for a category 1 emergency C section under general.

When I woke up from this I was taken back to the ward and was very unwell. I had contracted sepsis. I was told my baby had been taken to the neonatal unit and had to be resuscitated. He was very poorly.

A neonatal consultant came to see me to explain Alfie had been put onto antibiotics and bloods had been taken as they were unsure what they were dealing with. Over that weekend it was found out that Alfie had contracted group B Strep sepsis, it was unknown for a few days if he would survive this. Thankfully, he did and after two long weeks in the neonatal unit and he came home. He still has follow-up appointments to see if this has caused any long-term effects.

Shortly after this, I was diagnosed with PTSD and had found out that this could have been prevented if he had been delivered earlier and that I had been left in labour for too long after my waters were broken, which let the infection spread to Alfie. I wanted to share this to stop this ordeal happening to any other family.

What was supposed to be the best day of my life turned out to be the scariest and most traumatic ever. Just thankful he is here with me now, when it could have been very different.

If you are pregnant and have any concerns at all, keep going back to the hospital and do NOT take no for an answer – you know your body.