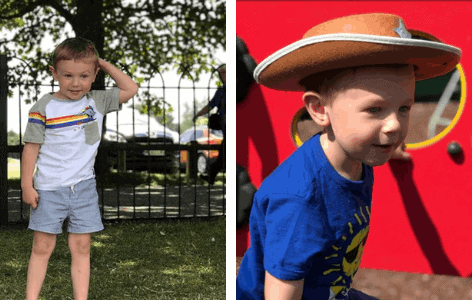 My name is Gemma and I have been battling with what happened or could have happened ever since my son Finley was born two years ago. I had a normal pregnancy other than the odd urine infection and Finley was born a very healthy 7 pounds, 7 oz.  We were initially delighted but I had my doubts that he was ok as he wasn’t fussing for a feed like other babies around him and just seemed to sleep all the time.

We stayed in hospital for 48 hours and were discharged after unsuccessful breastfeeding attempts and one small amount of feed in 48 hours. We took our very sleepy baby home not knowing that he was seriously ill. Our family visited for cuddles, passing around a sleeping baby. I reassured myself with the advice given to us in the maternity department by an “expert” feeding midwife that babies will wake when they are hungry and this is the advice we were to follow. We were first time parents and that advice seemed to reassure us.

The next day baby Finley was seen in the hospital as the community midwife thought he may be slightly jaundiced.  Whilst we were there he was weighed and I explained how sleepy he was and that he wasn’t waking up for feeds.  The hospital put him on a feeding plan and my husband and I were instructed to wake him every 2 hours for a feed and we were sent back home.

When Finley was 5 days old my usual midwife came to weigh Finley again and tried to feed him and he still wasn’t interested and took about half an hour to be woken up. By now he had lost 12% of his body weight and the midwife phoned the hospital.  She came off the phone and we were told to continue with the feeding plan. At this point, I found this overwhelming strength to stand up to her, the doctors and my husband. I said that she isn’t listening, he isn’t waking up, we can’t feed him and if he doesn’t feed he will die.

I will never forget the words she said to me “I know in my gut that he is being lazy” but I insisted he was seen again by the doctors. We took him straight back to hospital and were immediately told he now had a fever and was given urgent IV antibiotics. After further tests, bloods and lumbar puncture he was diagnosed with group B Strep sepsis. Even after my midwife found out how poorly Finley had become under her care, she said to me he didn’t feel hot, but at no point had she checked his temperature.

Luckily, Finley is a very happy and full of life toddler with no lasting effects. However, I am now expecting another baby in 5 weeks’ time. I am extremely anxious about history repeating itself and putting my trust in midwives who are supposed to be the best support a new mother and baby can have.

I have suffered from post-natal depression and extreme anxiety as a result of Finley’s diagnosis and the troubles he experienced after birth and have also suffered prenatal depression in this pregnancy. I am never going to forget the lack of care and attention from my midwife and can’t see how a day-old baby has the ability to be lazy.

I urge all mothers to trust their instincts and if something doesn’t feel right, get their baby checked as the results can be devastating.