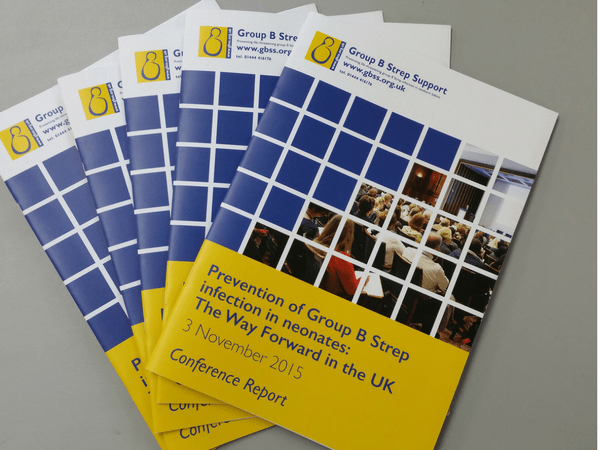 This was the first UK GBS conference organised by Group B Strep Support. It was attended by 232 delegates, predominantly healthcare professionals, plus stakeholders from other key organisations and parents. It was a unique day in its inclusivity, drawing together those with a focus on neonatal group B Strep (GBS) disease prevention.

The conference opened with an excellent address by Sir Nicholas Soames MP. What followed was a journey reminding the audience how GBS manifests clinically, sharing the results of the latest surveillance study detailing incidence, GBS epidemiology, an excellent overview on GBS prevention strategies, a review of national GBS screening policy and guidelines, laboratory updates, the legal perspective, and provider and patient experiences. There was plentiful time for questions and answers within the sessions, with some vigorous and engaging discussions and debate.

Whatever the position of the variety of speakers and delegates was and is, with respect to adopting a UK GBS screening program or not, it was clear that the prevention of neonatal GBS disease is a shared goal.

You can download a free copy of the conference report or order a hard copy (small admin charge) from our shop – click here.

Click on each link below to watch the presentation, and download the transcript (and slides where available).

Dr Alison Bedford Russell described how clinical presentations of group B Strep were different between early-onset and late-onset.

Dr Catherine O’Sullivan presented a comprehensive analysis of 817 cases of invasive group B Strep in infants under 90 days old, where the samples were drawn from sterile sites such as blood culture or spinal fluid.

Dr Theresa Lamagni focussed on the epidemiology of invasive group B Strep disease across all age groups from 1991 onwards, using data from Public Health England Laboratory reports between 1991 and 2014.

Prof Philip Steer considered the two major approaches to preventing group B Strep infection in newborn babies: one based on antenatal screening and the other based on identification of risk factors during pregnancy.

Dr Andrew Thomson provided insight into the introduction of the Royal College of Obstetricians and Gynaecologists (RCOG) guidelines. He stated that the process to revise the RCOG GBS guideline is now underway, “if the evidence was compelling that we needed to change the practice, then we could revise a guideline in one year or less.”

Questions for the morning speakers – chaired by Prof Neena Modi

Prof Androulla Efstratiou spoke first about microbiological screening. Currently: Most units did not use a sensitive test to detect GBS carriage*. Risk factors recommended by RCOG to select women for antibiotics in labour were poor at predicting GBS carriage.

Dr Gopal Rao said that before the screening programme was put in place in late February 2014, the Trust had for several years experienced substantially higher levels of invasive GBS than the national rate.

Mrs Grace Nartey spoke of how the screening programme had been first implemented in the hospital’s antenatal clinics then extended into the community.

Dr Richard Nicholl opened by saying how struck he had been by the honesty of the previous speakers when they spoke of “inefficiencies, errors and omissions”.

Dr Reshmi Raychaudhuri provided more background to the decision to introduce a screening programme at Northwick Park Hospital and the emerging results.

Dr Fiona McQuaid reported on a self-completed paper survey distributed to 100 pregnant women between July and September 2014, roughly 4 months after screening had been introduced.

Dr Gopal Rao 2 – Has the screening programme at Northwick Park made a difference?

Dr Gopal Rao concurred with Dr Raychaudhuri’s findings – although not yet statistically significant, the introduction of universal maternal GBS screening at Northwick Park Hospital had been associated with the reduction in the number of cases of infections and congenital pneumonia, with no cases of the condition identified after screening.

Mrs Alison Eddy briefed the conference on the grounds for GBS clinical negligence claims. In Mrs Eddy’s professional experience, birth injuries were largely the result of “problems not having been spotted, or problems identified but then somebody not coming when perhaps they should have come.”

Prof Tracy Roberts described economic evaluation not as absolute costs and benefits, but comparing new treatments to current practice. Prof Roberts said that a mother might be positive or negative, but what was then important was whether the interventions consequent upon the result prevented the baby from getting an infection.

Against a backdrop of a global crisis in antibiotic resistance, Dr Alison Bedford Russell said that antibiotics should only be given for a very clear reason, in the appropriate dose and for as short a time as possible.

Questions of the afternoon speakers – chaired by Prof Cathy Warwick

The speakers answered questions surrounding various issues such as the difficulties in informing parents about group B Strep and the choices parents have.

Prof Cathy Warwick closed the day. She said the debate had been presented in a very balanced and very responsible was, although ‘… there was a danger that… the professions had very much fallen into two camps’.