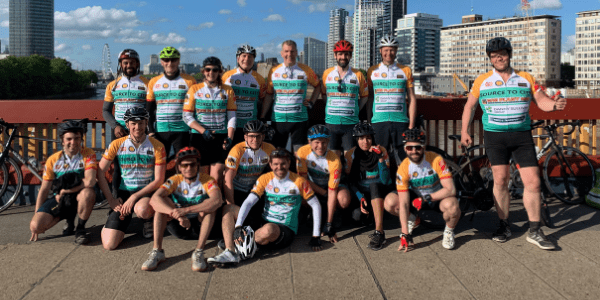 18 keen cyclists from the Albert team took on the Source to City Ride, cycling 180km (110 miles) from Gloucestershire to London in aid of Single Homeless Project and Group B Strep Support.

The team, made up of staff from Tideway, FLO and Aecom cycled the distance in a single day and have already raised more than £4,000 for charity.

Of the challenge, Oliver Smith (Sub Agent – Albert) said: “The team found the ride very challenging but ultimately very rewarding. There was a lot of determination on show through the rain, wind and hills with the odd burst tyre adding to the task. However, the countryside through the Chilterns made the last slog into London worthwhile.”

He added: “As a site we have raised money for SHP before, and Group B Strep Support was a team choice based on a number of shared experiences.”

If you would like to donate and support the team’s efforts, there’s still time to do so via their JustGiving Page.