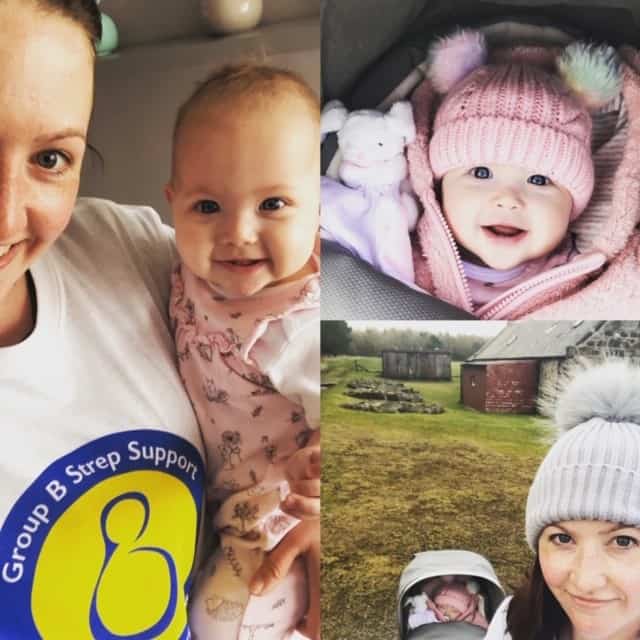 How and when did you become aware of Group B Strep Support?

When I was around 4 months pregnant I received a call from my Midwife to tell me that I had Group B Strep. It was only discovered because of a swab for something else and I was assured it was nothing to worry about and not to google it, which of course I did and it terrified me. I was receiving extra scans because I was found to have low PAPP-A hormone in my initial blood tests which in the end was a blessing because it’s how we knew Miley was, and remained, in the breech position even with an attempted ECV the week before she was delivered by c-section. Had she not been breech I still would have elected to go to Aberdeen to have her and not to my local Maternity Hospital in Peterhead as I’d read that the antibiotics which need to be given in labour should be given intravenously and my local hospital would only be able to give them by injection, of course I’m sure Miley and I would have been in great hands, but you want the safest possible outcome for your unborn baby. Regardless we were lucky, when so many aren’t.

What made you decide to fundraise for Group B Strep Support?

Ever since I learnt about group B Strep and the charity Group B Strep Support it’s been close to my heart and something I feel strongly about making people aware. This is why I decided to challenge myself, and Miley in her buggy, to walk twice the recommended target steps per day for a healthy adult … 20,000 steps a day in March!

Why did you choose to organise your own event?

As with a lot of challenges I’ve signed up for in the past I didn’t give myself a lot of time to think about it, just decided I was going to do it and try my absolute hardest.

How are you finding the fundraising?

I’m lucky to have so many kind and supportive friends and family who have donated so far and are cheering me along for the many steps of the way! As of the evening of the 10th of March Miley and I have covered 225,203 steps (93.16) miles so are ahead of target which is great as Miley’s Daddy and I have a friends wedding at the end of the month so realistically I won’t be able to meet my 20,000 steps that day but ideally I’d like to be well on course to getting to 620,000 steps ahead of 31st March with doing a couple of thousand extra most days anyway.

If you could say one thing to someone who was thinking of fundraising for Group B Strep Support, what would you say?

If anyone was thinking of fundraising for Group B Strep Support I’d say stop thinking and start doing! It’s such a worthwhile cause, nowhere near enough people are aware of it so even if you can make one person learn about it and raise a few pounds to help the charity it’s absolutely worthwhile!