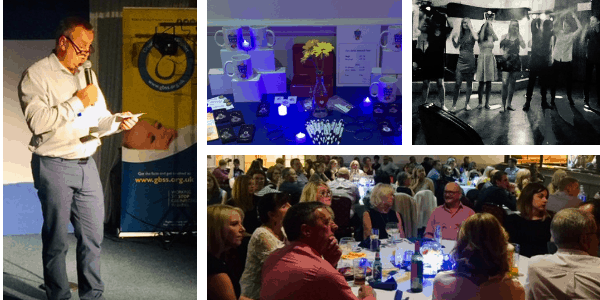 “Feeling Good” for Group B Strep

Awareness of Group B Strep was being raised by 14 year old twins, Hannah and Will Leighton, who helped to organise the Lee Hutton Sings Buble event at Alsager Golf and Country Club on Friday, 5 October. Hannah was very poorly with a group B Strep infection shortly after being born by caesarean section in March 2004, her twin Will was fine.  Their Mum, Sue Leighton, is now our Ambassador for Cheshire and Staffordshire.

The “Buble” evening was a collaboration between two charities, GBSS and the Jack Dulson Memorial Fund.  Information relating to the bacterial infections group B Strep and Staph aureus was presented to the 80 guests who attended.  Jack was in Will and Hannah’s class at school and sadly died in year 5, age 9, having contracted the infection Staph aureus.  A total of £380 was raised for Group B Strep Support and the children hosted a table of 10 from their school, so the message is definitely reaching the next generation.

Chris and Sue had never heard of GBS and were at first shocked and then angry to learn their daughter had the infection.  Reading the “Multiples” magazine from TAMBA that arrived shortly after the news was received, thankfully gave them the contact with Group B Strep Support.  Hannah remained in the Children’s Ward of UHNM Hospital in Staffordshire for 4 weeks having been born prematurely at 32 weeks, with a stay in special care for 2 weeks prior.  A symptom that the couple didn’t identify with, before Hannah left hospital, was poor feeding.   Once home Hannah couldn’t hold her own temperature, eventually went grey and floppy and was taken immediately back to hospital.  She had two lumbar punctures and intravenous antibiotics and the family consider themselves extremely lucky.  Team Leighton continue to raise awareness of group B Strep whenever they can.

During set up at this event, one of the golfers, who is a GP, popped in to volunteer to raise awareness by circulating the information for both charities within the practice newsletter which is distributed to a few thousand local residents.