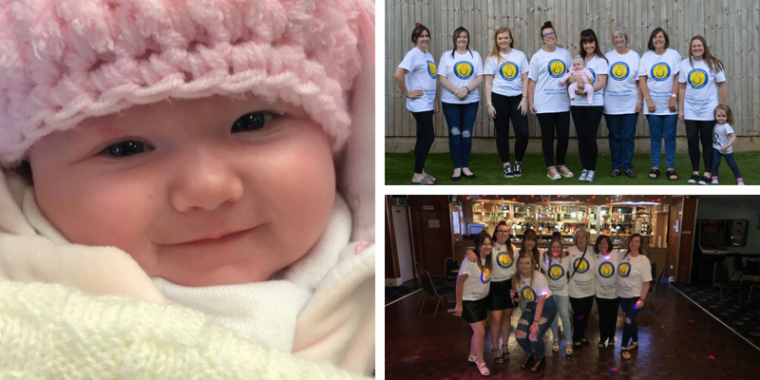 Kate writes “At only 5 weeks old our beautiful baby girl Isla Frankie became very poorly very quickly and was later diagnosed with late onset Group B Strep with sepsis. We acted fast when we knew something wasn’t right with Isla but not in a million years did we think she has late onset of the infection. We presented at A and E to be told we had a very poorly baby and that her veins had started to collapse. Her consultant was so shocked several days later when they got the blood results showing that Isla has Group B strep with sepsis and had only heard of 1 case of this in the last 15 years of practising.

I had been told 2 weeks following birth after a vaginal infection that I had Group B strep and 3 days later we were in hospital with our baby girl to be told she had developed the infection also. Devastated doesn’t come close to how we felt when we were given that news.

The one thing people ask me a lot is what we’re the signs that made us take her to the hospital as quickly as we did. The first thing was Isla’s high pitch cry. This was different to any other cry continued for hours and hours. Isla was making grunting noises as if she was constipated and not feeding well at all. She became very pale, rapid heart rate and her skin became mottled. She was very agitated and didn’t want to be touched. My heart sinks whilst typing this but then I look to the side of me and our beautiful Isla is smiling away at me.

With the excellent and fast intervention from all the paediatric team at Tameside hospital including lots of blood tests, lumber punctures, scans, and tube feeding our baby girl has made a full recovery. The care she received was nothing but amazing. It was the worst time for us and our families and I would not want anyone else to go through what we did. I am a nurse and I had never heard anything about Group B strep and was never made aware of the infection at any maternity appointment. I feel very strongly about helping towards providing information to pregnant ladies and health professionals about this serious infection in newborn babies. In the U.K., the NHS at present does not routinely offer pregnant women screening for the infection but you can pay privately to have this done. I want to help make more people aware by raising money for this excellent charity hoping that I can somehow say a big thank you and help people who are not as lucky as we are.

Myself and our amazing family who were our complete rocks held a fashion show charity night on Friday July 6th at Newton ward conservative club. Family and friends received upto 70% off high street prices including river Island, Next, M and S, Newlook and we raised over £1000 with all money being donated to the Group Strep B Support.”