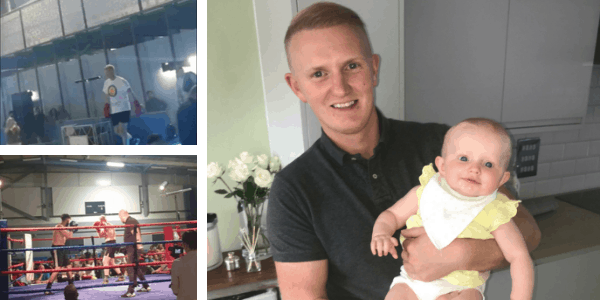 Jake write “Our daughter Ferne was born in September last year, my girlfriend Amy’s pregnancy was brilliant all the way through no problems whatsoever and no problem with the birth as far as we new Ferne was perfectly healthy.

At 3 days old Ferne started to have what we didn’t know at the time were small seizures. After speaking to doctors, midwives and health visitors we were told it was probably reflux and to try changing her milk. At 3 weeks old the seizures became more vigorous and more frequent so we decided to take her to A and E. When being seen by paediatric doctors Ferne had another seizure which is when they were confirmed and that this is what they were. Ferne was immediately taken for a ct scan. At this point they found a large amount of fluid on Fernes brain. Me and Amy couldn’t believe what we were being told and had never been so scared we didn’t expect this at all when we went to A and E with her.

We spent 3 weeks at the Royal Victoria Infirmary where Ferne received antibiotics she then finished off another weeks worth orally at home.

Since the shunt was first fitted it’s blocked 5 times resulting in surgery each time to reevaluate the shunt.

Ferne is now 10 month old and is turning into a beautiful happy baby and smashing all of her targets but things could have been a lot worse. I’m raising awareness in the hope that no one will ever have to go through what me and Amy went through and what too many new parents have been through not knowing about group B Strep.

I chose boxing as my way of raising awareness because it’s a sport I used to love and compete in. I haven’t boxed for 6 years and this was the perfect excuse for me to get back into it. I won my fight and really enjoyed being back in the ring and raising money for the charity. With this happening to Ferne it’s made me passionate about wanting to raise awareness and help Group B Strep Support as much as we can. Each year I’m going to try and do at least one fundraiser. I hope the money I’ve raised helps the charity as best it can.”