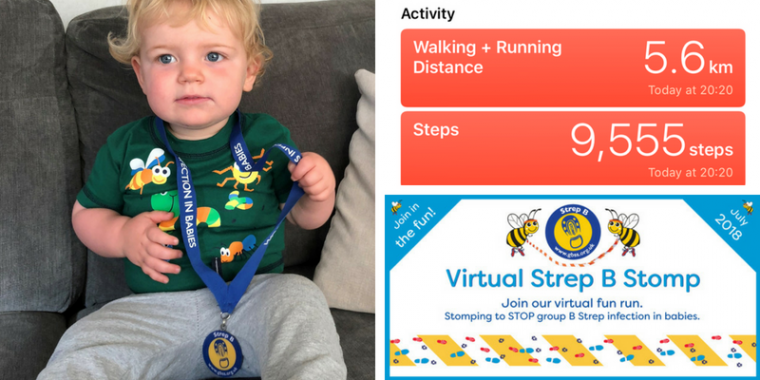 Gillian Writes ” Sammy and I walked the 5k at the start of July (I won’t lie he was pushed for most of it!)

Sammy contracted late onset GBS meningitis/sepsis when he was 10days old. After a two week stay in Ormskirk hospital and as a result of the outstanding care that we received there during Sammy’s stay, he is the happy and healthy little boy you see in the pictures!

I had never heard of Group B Strep before, during or after my pregnancy so Sammy’s diagnosis was a shock. We didn’t know what was wrong with him when we took him to A&E on the 19th February 2017 we just knew something ‘wasn’t right’, and I would implore any new or expectant parents to familiarise themselves with the signs of a GBS infection and if in doubt to always trust your gut instinct and seek medical advice.

I think what your organisation is doing to raise awareness of GBS is brilliant. Everyone should be educated on GBS during pregnancy so that they can make informed decisions. Keep up the good work!”