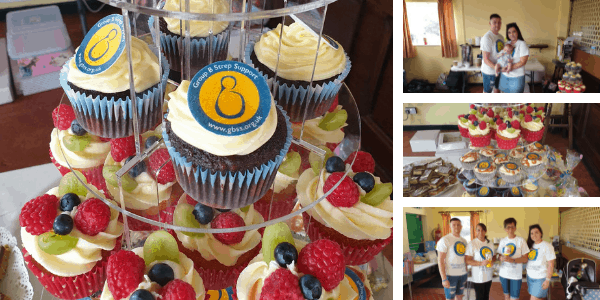 Becca Jones along with her family and friends held a Big GBSS Bake Sale and raffle in aid of Group B Strep Support and raised an amazing £1,823.

Hi, I’m Becca, Mum to 3 month old Grayson. Our first born son Grayson was born on the 3rd April 2019 (his due date!!) after a normal & healthy pregnancy. After a straight forward labour we came home the same day. The midwife visited the following morning and instantly recognised Grayson was becoming unwell very quickly.

An ambulance arrived quickly and myself & Grayson got blue lighted to the local Children’s hospital.

Unknown to me, I was a carrier of group B Strep and unfortunately Grayson had developed a group B Strep the infection. It hadn’t been picked up whilst we were in hospital and therefore Grayson didn’t have the early treatment to fight the infection and became extremely poorly very quickly.

We were in resus with Grayson for hours and after numerous amounts of tests the doctors had found out Grayson had unfortunately contracted group B strep which had caused Sepsis and Meningitis. His infection levels were so high he was also experiencing seizures.

Later on that day we were transferred to a high dependency ward and whilst there Grayson was monitored every hour, 24 hours a day for over a week.

Our poor boy had more tests in his first few weeks of life than most do in all of their lives. Grayson has had 3 Lumbar punctures, MRI scans, CT scans, numerous amounts of cannulas fitted; he was put out to go to theatre to have a PICC line put in. Grayson had 3 different NG tubes inserted through his nose to be fed through and much more.

Following this experience we have realised just how common carrying group B strep is and as a family we are committed to raising awareness.  The charity cake sale and raffle in aid of Group B strep we recently arranged was a huge success, raising an amazing £1,823.

Grayson still has a long road ahead in his recovery; we attend regular appointments to review his medication and health.

We will keep raising awareness so this doesn’t have to keep happening to families when it can be prevented with a simple test.”