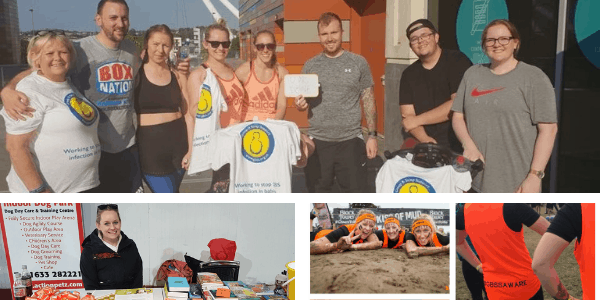 Alice Urrutia’s beautiful niece sadly passed away on the 2nd January 2018 after contracting group B Strep infection, she was just 5 days old.  Alice and her family were determined to stop this from happening to other families, so set out to raise as much as possible by holding a variety of fundraising events during 2018.

Alice said: “The 2nd January 2018 was the worst day of my family’s life, the day my precious and beautiful niece Amber passed away at 5 days old. She had contracted GBS before she was born, and it was something none of us had even heard of. The hardest thing was seeing the pain and suffering my sister and her partner were going through and knowing that really nothing I could do or say would help.

I knew that I had to do something though, something to help raise awareness of this deadly infection in babies and to also help the charity who had been so supportive of my sister and my family though this awful time.

I finally decided that I wanted to raise £10,000 within a year by holding various fundraising/awareness events… from selling orange bows for cars, Facebook live raffles, to the extreme 10-hour indoor sponsored cycle (ouch).

It’s safe to say the support we received for each fundraiser was outstanding. There were times I seriously regretted setting such a high target for myself, but when I’d open a message off someone who said they’d never heard of GBS until they saw one of my posts and had tested positive during their pregnancy and that they were now going to receive the antibiotics they needed during the birth.  I knew that it was all worth it to try and save other babies’ lives.

I knew that it was all worth it to try and save other babies’ lives.

The 2nd of January 2019 my JustGiving page showed 105% of target…I’d reached my goal in just under 12 months, something at the start of the journey I never thought would happen.

I will continue to raise as much awareness and money for the charity for as long as I can and at least until the time that a test becomes a mandatory part of every woman’s pregnancy.

I’d like to take this opportunity to thank the GBSS Team. Thank you for all your support, for all the leaflets and other resources you sent to us to help in our fundraising journey.

And a huge thank you to every person who came and held a bucket, who did a crazy sporting event with me, who gave out leaflets, who held a raffle and cake morning, who ran a marathon or donated just because they wanted to.”

Take part in an event

Taking part in an event is an inspiring and invaluable way to help us save babies’ lives Whether you need support with your fundraising, training tips or even fancy organising…